This replica medieval shield is constructed of 16 gauge steel. The shield size is 18 inches wide by 24 inches high, and it has a curved shape. The Hospitaller Steel Battle Shield is the classic heater style battle shield. They are hand-painted and then sprayed with a protective layer of polyurethane to preserve the artwork. The Knights Hospitaller shield is available in a wall display version with a chain from which to hang it or a hand held, battle-ready version with heavy duty, 1.5-inch leather straps on the back.

The Knights Hospitaller or Knights of St. John of Jerusalem originated about the time of the first Crusade. They took their name from a hospital at Jerusalem, a Christian brotherhood stationed a Benedictine nursing hospital next to the site of the monastery of Saint John the Baptist. Taking in Christian pilgrims traveling to visit the birthplace of Jesus, they provided care for the sick and alms for the poor. After the success of the First Crusade in 1099, the hospital expanded and set up additional hospitals along the route to the Holy Land. Recognized in a papal bull issued by Pope Paschal II on February 15, 1113, the order was formally named the Hospitallers of St. John of Jerusalem. The papal bull confirmed that the order was founded by the Blessed Gerard. Gerard acquired land and assets for his order throughout Jerusalem and beyond. His successor, Raymond du Puy of Provence, developed the first major Hospitaller infirmary. It was built near the Church of the Holy Sepulcher. Soon, they extended from caring for the pilgrims to providing them with armed escorts to the Holy Land. Many knights joined the Hospitallers, which proved to be useful in defending the Holy Land.

The order included knights and monks as members. These men took the monastic vows of chastity, poverty, and obedience. They also added a fourth vow which bound them to protect pilgrims and fight the infidels. The Hospitaller Knights were distinguished by wearing a black surcoat with a white cross. In 1830s, the Order established a new headquarters in Rome and new orders were installed in Italy and Britain. Over the centuries, the order gradually gave up warfare and focused on medical care and territorial government. Today the order no longer reigns any territory, but it is accepted as a sovereign nation by the Vatican and some Catholic European nations. 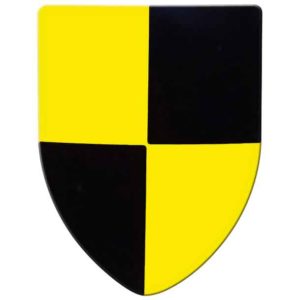